I like to stand outside on moonlit nights and watch the skies. When there isn’t a full moon, and I’m not looking for elves and werewolves, I enjoy guessing the time of night by the position of the constellations.  Because trees obscure my southern view, I couldn’t tell you what’s lurking in that direction.  Could be UFO’s or a Regal Cinema for all I know. 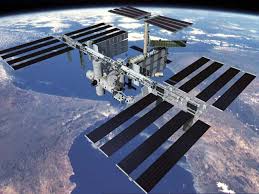 The Truth is Out There...Thanks to NASA

But the northern horizon… I’ve got that nailed.  And every 90 minutes the International Space Station zips through reminding me of the lies they filled our noggins with when we were young.

Remember as a kid, they told us the Great Wall of China was the only structure visible with the unaided eye from outer space?

Turns out it’s malarkey.  You can’t see it from the moon.  China’s own astronaut,  Yang Liwei, discovered he couldn’t even see it from the space station (which was cruising considerably closer than the moon).  His country was in an uproar.  Textbooks would have to be re-written.  Fortunately for the country, another Chinese astronaut,  Chiao , made the trip with a digital camera and a big honkin’ lens. His subsequent photos showed a section of the wall and were greeted with relief and great rejoicing by the Chinese. One photo was displayed prominently in the nation’s newspapers. Chiao himself said he didn’t see the wall, and wasn’t sure if the picture showed it. ( I wonder where he is today?)

So what about all that other crap they told us in our youth? 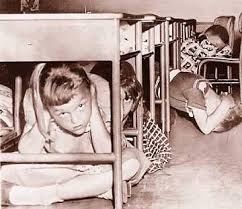 We had drills several times a year, learning to grovel under our desks. Duck and Cover was supposed to protect from an atomic bomb that obliterated buildings on a 2700 degree Fahrenheit afternoon?

We didn’t even believe that HooRah when we were nine-years-old.

And what about that “Permanent Record” that followed us through all the years of compulsory education?   It didn’t exist….until now.

Now, it’s called Facebook.  And its data base has a long long term m

emory.  Even if it’s erroneous.

Perhaps now is the time to practice “Duck and Cover?”

I escaped from a hardscrabble farm in Oklahoma. I'm not sure why people think I have an accent. I miss the sunshine, but not the fried foods.
View all posts by Barb →
This entry was posted in A Laugh, Enough, Humor, Life, Sleepless Nights and tagged Duck and Cover, Elves, Great Wall of China, International Space Station, Lies, Permanent record, Stars, UFO, Werewolves. Bookmark the permalink.