Sleeping at the Graveyard: Day 5: Walking Across England: Coast to Coast

Dallas Cowboy Fan and I look at the text message on the phone.

Then we look at each other. We’re half-way around the world.  What does our son, expect us to do about water flooding our basement?

Next text: And Turn off the water.

And Next Text: Are you sure it’s a broken pipe or did you clog the toilet?

NO ANSWER. So we call. That’s when we learn a couple of other people are ALSO staying at our house.

“Since you left for England…BUT GOOD NEWS!!!..it’s not a broken water pipe. Maybe there was a clog. Maybe not. But that’s not what we think the problem is.”

Hoo boy.  They are going to GOOGLE the problem. (I kid you not). Water is off. Buckets and towels are in place (my good towels, of course–not the ones in the garage for catastrophes like this). Scout says they’re working on the situation.  “CALL A PLUMBER!!” Dallas Cowboy Fan says before  hanging up.  We stare at the phone for a while. Then we look at each other.

“To heck with it.” Dallas Cowboy Fan says, turning over and pulling the covers up.  I stuff Little Pillow under by back and turn off the light. But we both know this isn’t the end of it.

The next morning, it’s cloudy, but not raining. After stretching and Advil, I tell myself, forget the plumbing—psyche up for the miles ahead. If we were going the way Mr. Wainright, the

God dumped all the leftover rocks he had on England—specifically this trail. At least the hills are getting smaller

creator of the trail, had planned it, we’d be climbing 2000 feet up over the top of Kidsty Pike. Instead, we’re on the longer, flatter route next to the seemingly endless Ullswater Lake. We would have used the ferry to steam us to the end of the lake, but our B&B host insisted that we would lose too much time waiting around for the ferry which leaves at 9:45 AM

However, seven miles later, by the time we reach the boat landing at the tail of the lake, the ferry has come and gone.  We moan over the fact that we could’ve saved ourselves a lot of walking on the rocky, undulating trail and had a nice boat ride. We console ourselves saying, “Well, we can say we actually walked over England; we haven’t taken any mechanical transportation—yet.”  (I still would have preferred the ferry)

Goodbye Lake District. Yeah, We walked over that hill in the background.

The trail left the lake, took to the roads and soon came to rolling hills, with grass as short as golf greens. I turned and yelled at the foothills behind us, “Good-Bye Lake District.” It had been a tough, but beautiful five days. Ahead of us lies miles and miles and miles of rolling Yorkshire Dales.

And sheep poo  EVERYWHERE, along with a lot of sheep. So many woolies, that we can’t find even 1 square foot of doo-less pavement or grass to sit on and have lunch. These animals are inputting at one end and outputting at the other—at the same time.

We eat on the move, strolling down lanes between tall stone fences.  Big tractors are 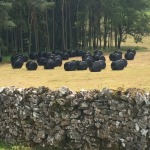 circling the fields next to us. One with a combine that sucks up fresh-cut green grass and blows it into a big cart behind.  Other tractors with carts are waiting and as soon as one is full, the next one takes its place.  The grass is chopped and compressed into 3X3 foot rolls, wrapped in black plastic  and dot the fields. It’ll be fed as silage during the winter.

On the road, we pass through the 1 house towns of Buttermere and then Butterwick, continuing on to Bampton ON GRANGE.  The Crown and Mitre doesn’t open until 4pm, but we arrive at 3. It has taken us 7 hours (stopping twice for breaks) to go 15 miles. (Yaaah, I’m getting better now that it’s flatter).

Before us…..Miles and miles of rolling pasture. This is probably the only photo we have with very few sheep around us. Yeah, we’re headed for that far hill. (we’re always headed for the farthest hill.)

The church and its cemetery are 20 feet away. Sandstone tombstones are as big as doors, most of them dated in the 1800s with seven or more people’s names on each one. They tilt precariously this way and that. A couple have given up their ghosts and fallen over.

I am so tired that I want to lay and sleep in the grass between gravestones, but I opt to nap on the picnic table in front of the inn. And then the chimes in the church clock tower peal a little tune. Every Hour. Every half hour.  (Even through the night.)

I was told that a “Passing Bell” is rung whenever a villager dies. Five rings for the death of a man. Four rings for a woman, three rings-a child. Then a stroke is added for each year of their age. When one of the older residents die, it takes a long time to ring the bells.

Rest in Peace in Bampton

Texts  from home have “gone dark.” We’re hoping that no news about the plumbing is good news. Our room is large and lovely, but best of all is the big, claw-footed tub. Each of us has a soak, then dinner.

We fall asleep, close to the dead next door, and the church bells serenading the night. We never hear a thing.

Next: The Clock is Ticking. Now We’ve Got to Hurry: Day 6: Walking Across England: Coast to Coast.

I escaped from a hardscrabble farm in Oklahoma. I'm not sure why people think I have an accent. I miss the sunshine, but not the fried foods.
View all posts by Barb →
This entry was posted in A Laugh, Change, Coast to Coast, England, Humor, Traveling and tagged Bampton on Grange, Buttermere, cemetary, Clogged toilet, Coast to Coast, England, ferry, Patterdale, Sheep, silage, The crown and mitre, Ullswater Lake, Yorkshire dales. Bookmark the permalink.

20 Responses to Sleeping at the Graveyard: Day 5: Walking Across England: Coast to Coast