Of course, the path starts out lovely and elf-like through the woods. Immediately we 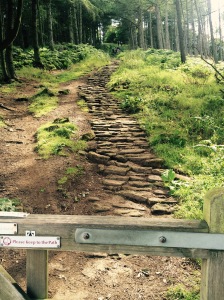 begin climbing through country estates of moor after moor–each one getting higher, and my eyes getting bigger and bigger at the “rollercoaster gradient” (as the guidebook charmingly calls it).  I had expected a rather “flat” day of walking. By the time we’ve gone a few miles, we’ve reached nearly 3800 feet of accumulated ascent.

Earlier, we’d stopped at Lord & Stones Tea Room for a second breakfast.  Now we stop at ClayBank Top ( a wide spot in the trail) to eat our packed lunches.  It’s one of the few places we can get a phone signal, and if we had any sense, we would call a B&B to come get us. (HINT: Stopping over at Claybank is the No. 1, item on our “If-I-had-To Do-It-Over List.” There’s only one inn within the moors (and we aren’t even close to it yet), but B&Bs from the surrounding towns will pick you up and drop you back off the next day.)  Do it…or you’ll find yourself doing strange things. . . out of tiredness. 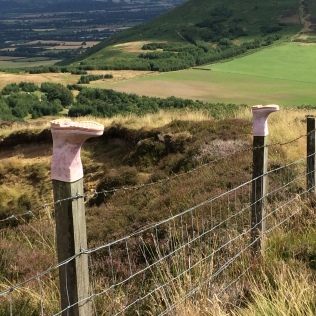 The goofiest things make us laugh along the trail 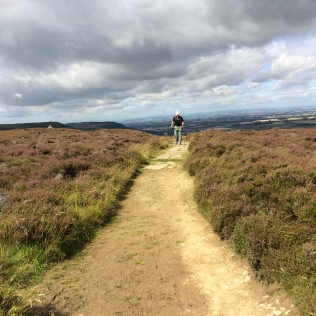 To the far horizon

I know I said I would stop taking shortcuts, but I lied. The first chance I had, I asked locals for secret byways across the moors. I was told, “There aren’t any.” Curses.

The trail stretches out as far as we can see in front and behind us.  There’s no one around. Mile after mile. And another mile. Then another. A little hike-crazy, I sing show tunes to pass the time.  Dallas Cowboy Fan walks faster in an attempt to get away from my Broadway Revue.  But he has begun to talk to sheep….and keep up their end of the conversation.  Sometimes he’s interrupted by grouse, harking, “Ralph, ralph, ralph,” as they fly away.  And I ralph right back at them. 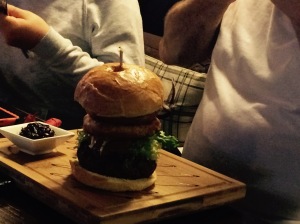 Throughout England, I NEVER received a burger less than 6 inches tall.

Then we talk to each other. Bad jokes. tired-stupid laughter. Stories we’ve heard before.  Stories we don’t want to leave in the moors. We hone the “Where-Can-We-Hike-Next List.”   Of course, food is a topic.  But we’ve discovered from previous long hikes, there comes a stage when appetite disappears and eating is simply a function of intaking fuel.  This is the second time on this trip, we’re really not hungry, and not even discussions about the piles of potatoes, yardages of sausages, or uber-stacked hamburgers we’ve been served in England sound good. Eventually we settle into the quiet zen of walking, our legs roboting along in automatic strides, our poles thumping the beat. A light mist begins to fall. And the miles roll on.

After a long while, we round a bend between hillocks and I shout. Through the distant haze, I see the red roof of the ONLY inn on the wide, wide moors. By the time we reach it, the bottoms of our feet are numb and both of our water bags are empty.

I chug a pint as soon as we reach The Lion.  We’ve jumped ahead of most of the other C2Cers. Only 6 other people made the long haul today.  After dinner, we slip into our Swing-A-Cat room (my term for “It’s so small, you can’t swing a cat without hitting the walls).

It doesn’t matter. By now we’re used to rearranging rooms, sticking tea trays in drawers and chairs in amoires.  It has a tub to soak in. The heat and the drying racks are on.

Rain is tapping against the window—and after 21 miles, we’ve finally made it inside.

NEXT: Harry Potter, I’ll Meet You At the Station with Father Brown’s Pear Drops: Day 14: Walking Across England: Coast to Coast

I escaped from a hardscrabble farm in Oklahoma. I'm not sure why people think I have an accent. I miss the sunshine, but not the fried foods.
View all posts by Barb →
This entry was posted in A Laugh, Change, Coast to Coast, England, Humor, Traveling and tagged big hamburgers, Blakey Ridge, Broadway showtunes, Claybank Top, Coast to Coast, England, grouse, long hikes, Osmotherly, Swing A Cat, the English moors. Bookmark the permalink.