How To Take A Viking River Cruise: Part 2

OR…Do A Grouch A Favor

Yes, I’m in the middle of a story. If you missed Part 1, you can find it here. 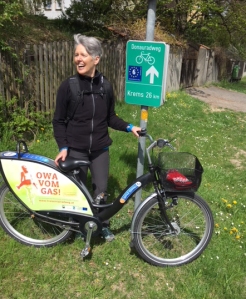 Refresh your memory, then come back because, you need to know that in the U.S. February 16th is “Do A Grouch A Favor Day.”

Keep this in mind because I was in a grousing mood when I left Amsterdam and began cruising the Danube in a Viking ship. It didn’t take long for me to start bellyaching about the “confined” feeling of the ship. Occasionally we got off to traipse around a castle, and then we resumed floating past many, many more castles. I was trapped, listening to the stories of somebody’s brother’s health problems, or Aunt Whowho’s cake decorating business, or tales of “my son, the successful doctor.” (Shoot me now.)

Escape was difficult. The exercise deck was flattened. (Literally). Chairs, railings, and posts had been folded, hugging the top-deck so the ship could pass under low bridges and locks. You could sit (or pace like I did–inside) and watch the world go by.

But in Melk, Austria, the ship’s tour director arranged a treat for me and Dallas-Cowboy-Fan. A company close to the docks rented bikes. We checked in on-line, and the company sent us the combination of the bike locks. We unleashed our sturdy wheels and off we rode.  Our mission was to beat the ship to Krems, twenty-five miles away.

Now…a word about these bikes…when I say sturdy…I mean…like tanks.  Each bike weighed 40 pounds, had 3 gears with only back-pedaling to stop. But I was glad to be free, doing something, exercising, exploring. (Yahoo!!!!)

We took off like children at recess. About 4 miles out of town we pushed our wheeled-freighters up a hill to a bike-bridge over the Danube.

A group of cyclists we’d seen in town passed us, laughing about our WWII era bikes. It was the first of many snickers about our rentals. But I was glad to have the sturdy steed beneath me as we rushed down the concrete bike bridge, 3/4 mile long, picking up speed until we were flying over the Danube around 30 m.p.h. My stocking cap, which was in the front basket flew out, and I snatched it mid-air, petrified I’d somersault into the river and die if I took my hands off the handlebars again. 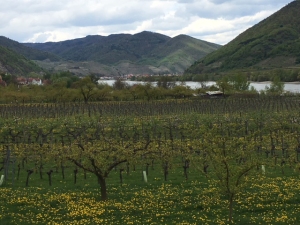 Orchards and Vineyards of Wachau Valley. Danube in the background

We should’ve taken pictures from the bridge, but neither of us were sure our gears wouldn’t strip if we tried to stop. The path turned into a winding trail through miles of countryside. Shrines of The Madonna or Jesus stood in vineyards or at the entrances/exits of tiny villages (prayers for a good harvest and blessings.) People were friendly, except the two old fraus in leggings who looked at us as though we were riding dead chickens.

The boat had already docked by the time we reached Krems. As I pushed my bike past it, a man asked me to take his picture in front of the boat. I told him, “Ich spreche kein Deutche.” (I don’t speak German). He cocked his head, confused.  “Keiner?”  (None?) I shook my head and continued looking for the kiosk where we could  self-check-in our bikes and stop the clock ticking up the fee of 5 Euro an hour). (It had taken us 4 hours. Okay…we stopped and ate and drank a little along the way.)

In 5 minutes, we got back to the ship. The man was still there, admiring the boat. I felt like a donkeybutt for being unkind after such a glorious ride. “Willst ein foto?” (Want a photo?) I asked him. “Ja wirklich?” (Really?) he asked.

I nodded and he handed me his camera and began waving and calling people sitting on the benches. Aunts, uncles, grandma, kids…ten people hurriedly assembled in front of the gangplank, with the red Viking banners proudly waving on either side of them.

And that’s when the trip changed.

I’d been pacing, walking hallways, wanting to get off that ship. In front of me were ten people, hoping, dreaming that someday, they’d get on that ship and go somewhere else. Until then a picture would have to do. It would sustain their hope of someday.

And then they gave me a kindness. I asked for their story, and they shared it. They told of their time of living in eastern Europe, of bananas as birthday presents (because they were rare), of cotton shortages and only polyester clothing, of Levis that were 2 week’s wages on the black market. When the wall fell, they made it out. Life was better—GOOD!  But someday…

My grouchiness died right there with the dawning that I was blessed. Fortunately, that gift has mostly stayed with me.  When I have too much to do, or hate our politics, or don’t want to cook another frickin’ meal, I’m back standing on that dock, seeing the world through their eyes.

So … how do you take a Viking cruise (or any journey)?

Yep, I’m going back out with Viking and try it again. A different river. Different countries. Different attitude. Instead of clothes, I’ll worry about being be more alert, watching, looking for how we’re all different or the same. I’ll write stories when I can’t exercise. Maybe I can ditch my expectations  (connections, weather, and grumpy peeves I drag around).  And heaven help me, I’ll learn to listen, especially when I hear  Auntie Whoever say, “my daughter, the successful banker….” (but honestly, I’ve already got a list of topic-changing questions in my pocket).

And if my attitude fails?

That’s where you come in. Remember, “Do A Grouch A Favor” Day?  February 16th? There’s no reason it can’t be extended. Nothing kicks butt out of a bad attitude like receiving a kindness. If you run into someone cranky like me, please take a moment to be kind. Sure, the person doesn’t deserve it, but your small gentleness will help the healing. (Trust me). And….who knows what changes will come? That grouch may carry the thought of you with them for months and perhaps over an ocean miles way.

But especially on Feb 16th. Please come back and tell me what you did for a grouch.

And we continue the journey….

I escaped from a hardscrabble farm in Oklahoma. I'm not sure why people think I have an accent. I miss the sunshine, but not the fried foods.
View all posts by Barb →
This entry was posted in A Laugh, Appreciation, Change, Choices, Traveling, Worries and tagged Behind the Wall, Biking, Germany, Krems, Melk, Packing, Travel, Travel and exercise, Viking. Bookmark the permalink.

26 Responses to How To Take A Viking River Cruise: Part 2